It's almost New Year's! The start of a new year means something different to everyone. Often it invokes feelings of joy and optimism. Here in Somerville, New Year's Day carries a special meaning. For on that day we celebrate one our local treasures: the Grand Union flag. 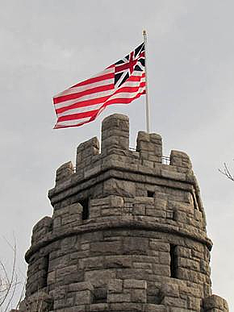 by George Washington on Prospect Hill, on January 1, 1776. But did you know that it is still celebrated by those who love our city most?

In fact, since she took helm at the Historical Preservation Commission, Brandon Wilson has worked to return the "grandness" of celebrating the Grand Union flag. A major celebration is prepared for New Year's Day, with a procession starting at City Hall, and finishing at Prospect Hill.

What a great opportunity to experience a profound piece of history, right here in Somerville! We often forget what we have right here, in our own backyard. The first shot fired during the American Revolution may have occurred in Lexington, but the battle lines were drawn here in Somerville, with the raising of the Grand Union flag.

At our Somerville auto repair shop, we look up and see the Grand Union flag every day, waving proudly, as if it's wathcing over us.

What are you doing New Year's Day? Why not get out and see the procession? Stop by Prospect Hill, and think about what the new year means to you. And how if it wasn't for George Washington and the Grand Union flag, it might mean something entirely different.